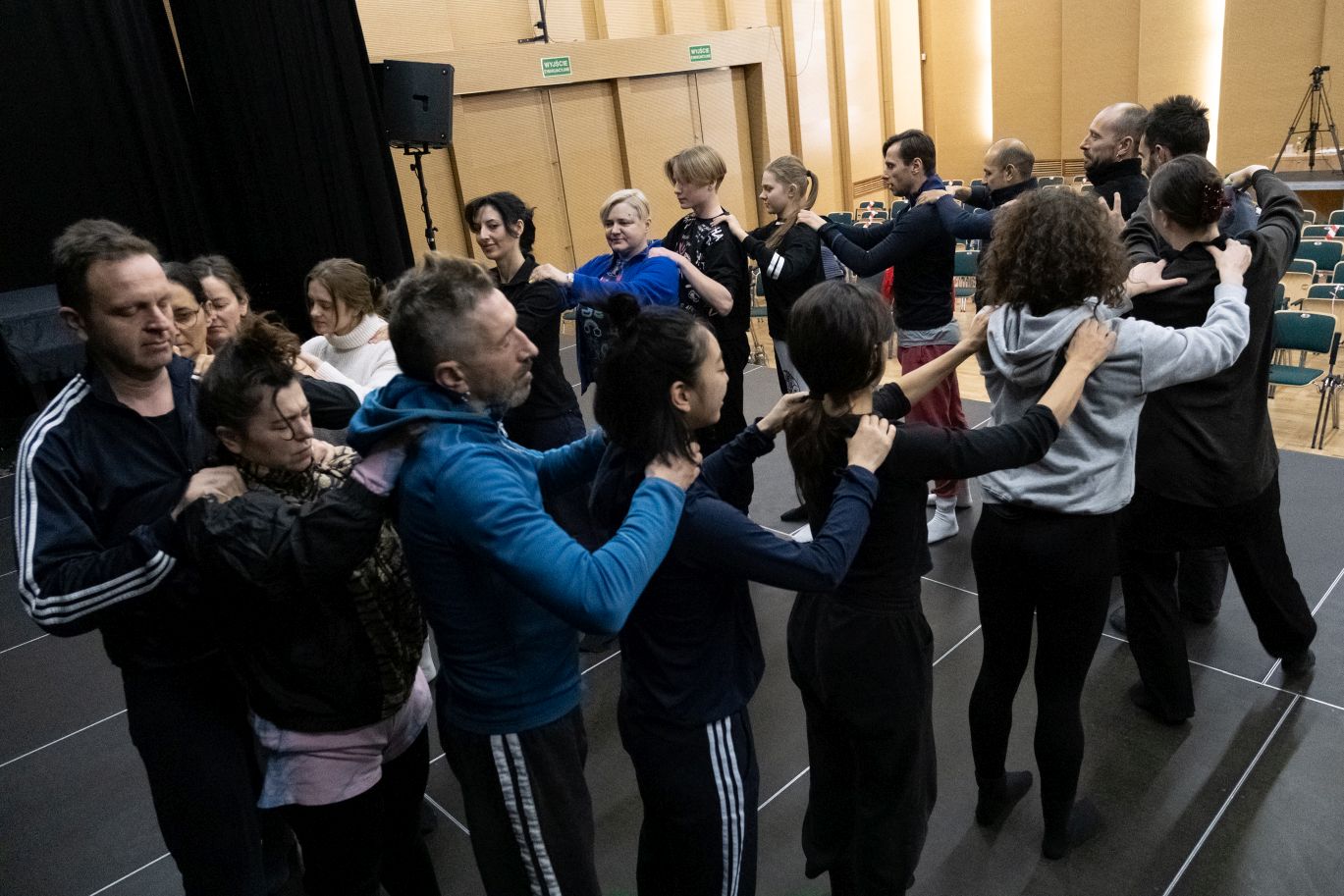 DANCE HIGHWAYS workshops in Warsaw will be divided into two parts. The first part will consist of two days of common meeting of dance professionals – artists – dancers and choreographers in a common conversation and action with managers and promoters of contemporary dance participating in the transnational meeting action (December 11th-12th 2021, 9:00-13:00-CLOSED SESSIONS)

The second part of the workshop is an action of dance artists belonging to the DANCE HIGHWAYS network in a meeting with local workshop participants, where the main leaders are three artists from the HOTELOKO movement makers collective: Agata Życzkowska, Mirek Woźniak, Klara Szela. During three days, one by one, each of the HOTELOKO artists will invite you to take part in common activities and learn about good practices of the collective. (December 13th-15th 2021 between 9 a.m. and 1 p.m.) OPEN SESSIONS)

Partners of the network DANCE HIGHWAYS:

The U:NEW Festival is co-financed by the Foundation for Polish-German Cooperation, the European Commission in the Erasmus+ Programme, the Cervantes Institute in Warsaw 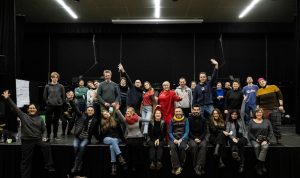 DANCE HIGHWAYS workshops are an important element of the International Movement Festival U:NEW. They take place within the international project DANCE HIGHWAYS supported by the European Union under the Erasmus + program. The Warsaw event is hosted by the ‘Nowa Fala’ Foundation for Theatre Development and the HOTELOKO movement makers collective. The Warsaw edition of the workshop will be led by Agata Życzkowska, Mirek Woźniak and Klara Szela.

Running by AGATA ŻYCZKOWSKA
The workshop is based on discovering one’s own topics related to ecology, which are important for individual participants at the moment. The aim is to find the starting point for building the dramaturgy of a choreographic etude around a particular theme. Attention will also be paid to the connection between body and voice, where in addition to group work on building a common bond, great attention is paid to sound tasks using both body and voice work. The exercises are fun and can be completed by both professionals and people with less movement experience. The workshop uses the individual skills of everyone without emphasis on collective choreography, practicing everyday and authentic movement. 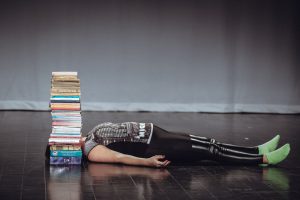 AGATA ŻYCZKOWSKA
Choreographer, dancer, playwright, actress and dance curator. Graduated from the Acting Department of the National Film School in Łódź (2001) and completed postgraduate studies in Cultural Diplomacy at the Jagiellonian University in Krakow. Since 2011 she has been leading the HOTELOKO movement makers collective. She gained dance and performance education under the guidance of such artists as Nadia Kevan, Jairo Cuesta, Akira Matsui, Daisuke Yoshimoto, Claire Heggen, Thomas Leabhart, Ray Chung, Natalia Iwaniec, Michal Sayfan, Anna Godowska. As part of the HOTELOKO movement makers collective she has produced several performances, including the award-winning “Axiom of Choice” at the Sopot Theatrical Consequences Festival. She also works with young people – she realized, among others, the dance performance “Insta Show” (2018) in collaboration with Magdalena Przybysz, as well as the project “Podaj dalej taniec” in collaboration with Dawid Żakowski (2019). She is interested in environmental art, which she often weaves into her pedagogical work. 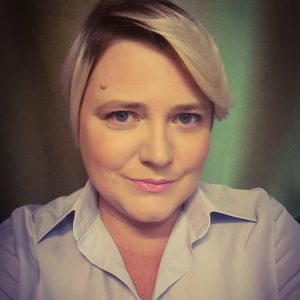 Running by MIREK WOŹNIAK
An in-depth practice in which we will attempt to get to the heart of our performative representation through movement and word…. We will settle down in our “private moment”, which will be the starting point to work on our personal emotional-motor trace. Following a conscious impulse from the body will occur by establishing a thread of contact with our “inner dancer and dancer”. The synergy of these experiences will constitute a field for a safe confrontation between our “I” and the dream of contact with another human being – the spectator. 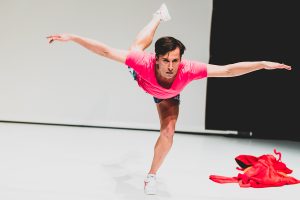 MIREK WOŹNIAK
Dancer, singer – musical actor, choreographer, performer, educator. Master’s degree at the Warsaw Academy of Physical Education and postgraduate studies in Coaching and Mentoring at the Laboratory of Psychoeducation in Warsaw. Co-founder of “Kompania Primavera” art collective with Iza Szostak, Ramona Nagabczyńska, Anna Hop, Szymon Osiński, led by Dariusz Lewandowski. He has cooperated with Janusz Józefowiecz, Mikołaj Mikołajczyk, Natalia Korczakowska, Maja Kleczewska, Marta Ziółek, among others. He conducts classes of contemporary dance, improvisation, stage movement mixing different dance techniques used in musicals such as jazz, modern, funk. In his work with the HOTELOKO collective, as a dancer and choreographer, he uses the techniques of flying low, animal movement, contact improvisation, but also relies on his own method of permanent flow, which he calls “liquid spirit”. 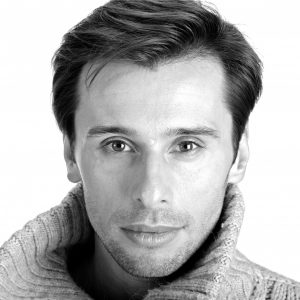 Runnig by KLARA SZELA
The workshop will take the form of movement research based in the first part on deepening the bond with yourself and consciously discovering the potential of your body. We will use specific movement qualities, the effects of which we will experience, and which we will try to interpret. In the second part of the workshop we will focus on creating a safe space for mutual touch. In this space we will try to find pleasure and through it bring the body to a state of deep relaxation.

At the end I will invite you to share the feelings and needs that arose during the workshop. 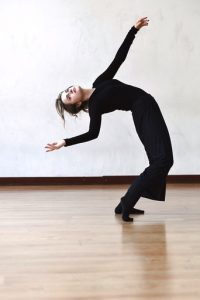 Dancer, choreographer, performer. She graduated from the School of Choreography in Krakow with the title of choreographer and contemporary dance instructor and completed a course in experimental choreography at the Center in Movement in Warsaw. She worked with Stefano Silvino, Marta Kosieradzka, Marcin Mięteus, Karolina Kroczak. Together with Milena Suska she created the duet “well come” and the solo “Inflating” inspired by objects and sculptures of Oskar Zięta, which premiered at the Festival Internazionale Dissidanza in Palermo. She has also begun collaboration with the HOTELOKO movement makers collective on the performance “EXTINCTION” and the project DANCE HIGHWAYS. 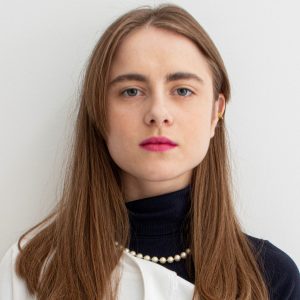 DANCE HIGHWAYS is a European project which brings together six partners working in the field of contemporary dance: L’espace ASDC and Zappulla DMN Company in Palermo, Theatre Development Foundation ‘NEW WAVE’ and HOTELOKO movement makers collective in Warsaw, THEATER DER KLÄNGE in Düsseldorf, Dansearena nord in Tromsø, La Fundicion in Bilbao and La Galerie Chorėgraphique in Carcassonne. The project will run until August 2022 and aims to exchange good practices between professionals in the field of contemporary dance and related arts and to raise the competence of dance artists through dance workshops of various techniques. The idea of the project is to support and improve the quality and accessibility of art and culture. It is also a cultural education project for contemporary dance artists which aims to strengthen the synergy between the partners in an artistic, cultural and social context. For the six partners of the DANCE HIGHWAYS project the aim is to find answers to questions about the future of dance art in the context of a pandemic crisis for both the choreographic sector and vulnerable groups of the community through a range of tools provided by contemporary dance practices.