She has played several dozen roles in theater, dance, film and television. 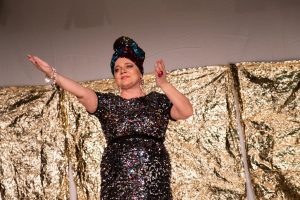 Former Editor in Chief of the social and cultural periodical RAZEM. Świat w naszych oczach [TOGETHER. The world through our eyes] (2003-2007). She collaborated with the Ciało/Umysł Foundation as coordinator and producer of the Ciało/Umysł Festival and the Warsaw Dance Stage (2011-2013). She ran a number of educational and cultural project for youth in collaboration with Magdalena Przybysz and Dawid Żakowski. Chairperson of the Theatre Developement Foundation ‘NEW WAVE’ (since 2009) and the director of the Dance Art Center in Warsaw (since 2017). Founder of the HOTELOKO movement makers Dance Company (2011) where she produced, directed and starred in a dozen or so shows. She directed four performances in collaboration with Magdalena Przybysz: frau/mujer/femme (2016), #moiprzyjacieletancza (2016), Absolutely Fabulous Dancers (2017), INSTA SHOW (2018) and a spectacle for children and young adults entitled DARKLENA (2018) in collaboration with Wojciech Grudziński.

This website uses cookies to improve your experience while you navigate through the website. Out of these, the cookies that are categorized as necessary are stored on your browser as they are essential for the working of basic functionalities of the website. We also use third-party cookies that help us analyze and understand how you use this website. These cookies will be stored in your browser only with your consent. You also have the option to opt-out of these cookies. But opting out of some of these cookies may affect your browsing experience.
Necessary Always Enabled

Any cookies that may not be particularly necessary for the website to function and is used specifically to collect user personal data via analytics, ads, other embedded contents are termed as non-necessary cookies. It is mandatory to procure user consent prior to running these cookies on your website.