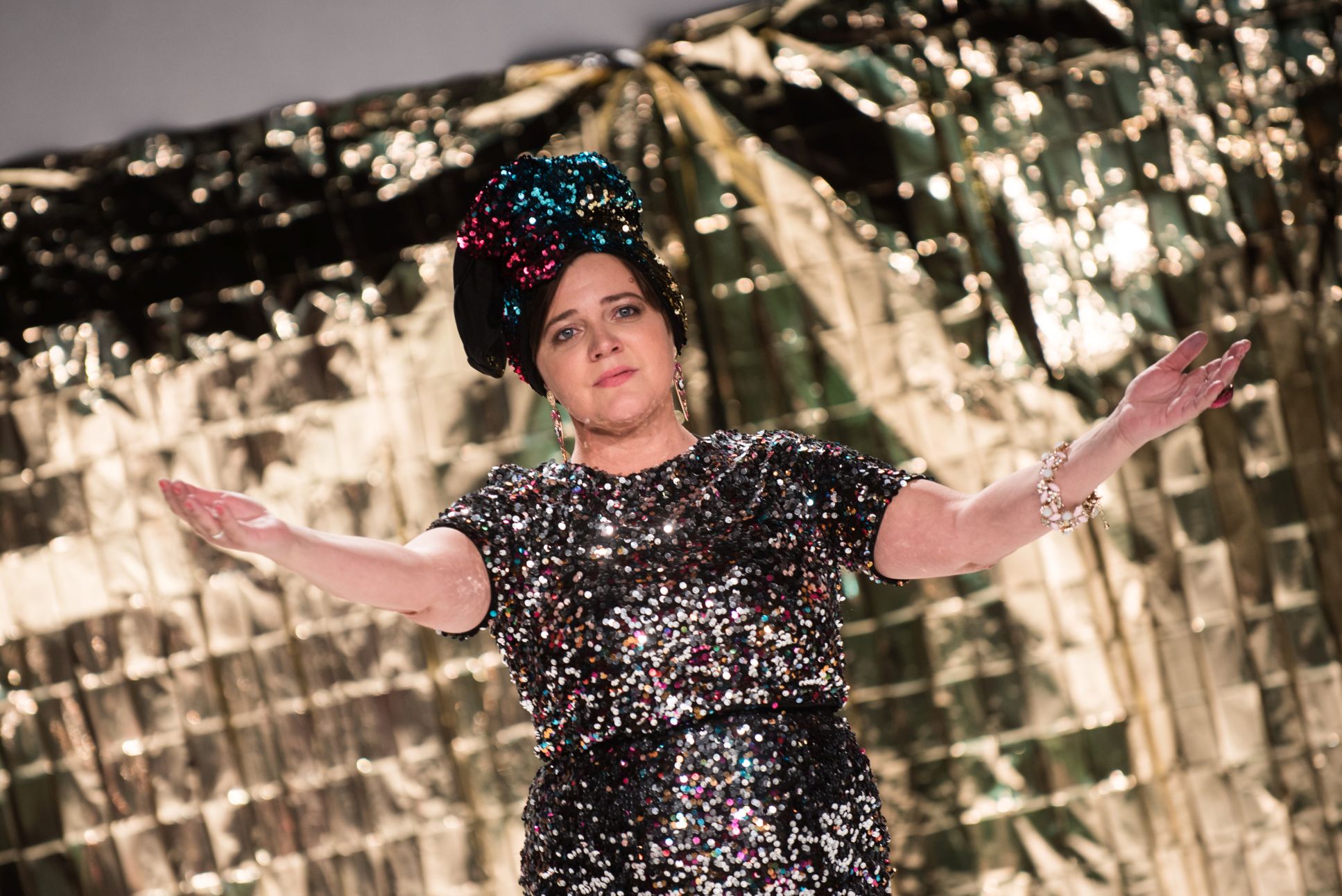 During the opening of the Dance Art Center’s residency at the new building of the Dom Kultury Kadr culture centre in Warsaw a performance of the Absolutely Fabulous Dancers by the HOTELOKO movement makers collective was presented. The white set on the modern-looking stage of the Kadr culture centre transported us into a completely different world. On the forestage, we see lots of colourful objects: pink and neon plastic water bottles, an Oscar award statuette, glittering sequin clothes. All this is a harbinger of a pop cultural show that is about to begin.

The show starts with a long video screening, which surprises the audience at first, given that we are expecting a dance show, but as the scenes progress, the idea behind this genius dramaturgic measure becomes clear. A fragment of the memorable TV show Dynasty, where a UFO abducts Fallon, one of the characters of the show, was not used accidentally to begin a story about absolutely fabulous dancers. A moment later, three artists resembling extra-terrestrial creatures existing a space ship, appear on the stage. The screen displays the sign: “Absolutely Fabulous Dancers”. The performers begin dancing together to a song by Zdzisława Sośnicka. Actually, what they are doing is not really dancing – what we see is movement, pulsation, rhythm. In fact, the dancers are not dancing collectively, but each seems to be dancing alone. The lyrics of the song played are not accidental either: “An alley of stars/We’re running through an alley of stars/God knows the way, under a starlit sky/Under a starlit sky we live/Everyone is their own”. This is exactly how we see the three characters on stage: dancing in a way that is a little bit funny, and a little bit sad, sometimes perfect, at other times awkward. They are running through the alley of stars. What is it, though? The road to success which no one can define.

In the following scene, we hear the voice of fitness coach Ewa Chodakowska who is motivating others to work out. We see two characters on the stage: a young, slim male dancer who makes each movement with care and attention and pleasure (the incredibly perfect Wojciech Grudziński) and a slightly plump female dancer, past her prime, who is wearing heels and is struggling for perfection (the incredibly genuine Agata Życzkowska). At the same time, in the background, a video begins to play where we see the female dancer practicing ballet moves. She is some 20 years younger and some 20 kilograms lighter in the video. This scene introduces us into the topic of the identity of an artist, but also the identity and the passing of each of our lives. Very moving is the next scene when the male dancer does a split with ease and the female dancer unsuccessfully tries to do one. This depicts a stark contrast and at the same time it created the language for the story where not everything will actually be ‘absolutely fabulous’. In the scenes that follow we see similarly beautiful contrasts such as the solo dance performed to the music of Tchaikovsky by Grudziński dressed in a tutu. With each subsequent move made during this dance, we can see how much the artist would never be able to dance the part of Odetta from Swan Lake. The daring monologue by Agata Życzkowka delivered in a number of foreign languages (English, Spanish and French) about what it is like to be absolutely fabulous is both entertaining and is testament to the acting artistry of this actress and dancer in one, and the scene is yet another priceless image that makes up the entire artistic expression. The duet by Magdalena Przybysz and Wojciech Grudziński performed against the backdrop of the historic statement made by Communist ruler Edward Gierek in a 1970s propaganda speech:  “We are the same as you are, cured from the same clay … Can you help?” and to the song by TATU band Nas nie dogoniat completes the dramaturgical structure of the performance. This measure has a profound effect on the audience, since both the visual and audio elements are selected in such a skilful way that everyone in the audience, irrespective of their age, can relate to it. The choice of these different symbols of culture and the combination of them all into a personal set produces a new image of contemporary Poland and its position as a country in Europe and the world. The performance is deeply grounded on the identity of the artists. Owing to this, what we see on the stage are real, living people whom we admire, who entertain us, who move us and whom we feel sympathetic to. But we also see in them a reflection of ourselves, of ‘absolutely fabulous people’. The final performance of the dance sequence to the song Alley of Stars, in different costumes this time, is thought-provoking. The scene is not as funny as it was at the beginning of the show. The context has changed, the artists and the audience have come a long way since the start of the show. And at the end of the day, ‘everyone is on their own’.

HOTELOKO movement makers is a collective created and run by Grudziński, Przybysz and Życzkowska. The intriguing mix of the skills of the dancers and choreographers with the talent of the director and actress produces incredible results. The performance has a new, very European quality, rarely seen in other dance works on the Polish market. The collective is brave, they deploy many different means of expression and the effect of performance on the audience is very strong.

It is a dance performance which actually features no dance per se. It features movement. Movement by movement makers, or the HOTELOKO. Remember the name. You are bound to hear about them in the future.